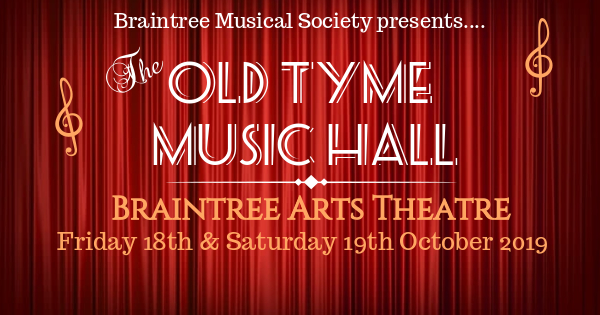 Arriving at the Braintree Arts Theatre for the first time was a real surprise. What a super venue for performance.

The format of the Old Tyme Music Hall provided the Braintree Musical Society with a great platform to show a wide range of talent. The opening medley really gave the audience a flavour of what was to come. It was lovely to see the mixture of age groups all singing those old traditional songs.

Our chairman for the performance played by Craig Tyler kept the whole show moving with a strong character and a very good script. The rather subdued audience didn’t always give him the response he deserved.

With such a wealth of solos in Act 1 from Rhian Hobbs, Lucy Sharp, Anthea Kenna, Richard Cooper, and Jan Wash it is difficult to single out performances but one of the early numbers I particularly enjoyed was Janet Moore’s singing of ‘The boy I love’. Anna Funnell gave us a lovely performance singing ‘Spread a Little Happiness’ and the beautifully controlled rendition of ‘The Day after Tomorrow’ from Emma Loring was a real treat.

The sketches added variety to the show but needed a little more pace. Another contrast was Roy Morkham’s gentle rendition of ‘Keep Right on to the End of the Road’.

The ensemble medleys were all very well performed. The clever but light choreography gave a good flow to the various numbers. It was obvious that the whole cast was enjoying themselves and this really came across to the audience.

The opening of Act 2 gave us a sparkling beginning. Lovely costumes, lively singing and great lighting. This was followed by an excellent rendition of ‘The Alto’s Lament’ from Rebecca Tyler, a song very close to my heart.

Once again we were well entertained with solo performances from Douglas Ball, Richard Cooper, Roy Morkham and Robbie Robertson and a well loved poem from Linda Kendall. I really enjoyed the new version of ‘Nobody Loves a Fairy when she’s 40’. Great new words and super characterisation from Gabriela Spindler-Mosquera, Anthea Kenna and Richard Cooper.

The final solo numbers were a delight. ‘Keep the Home Fires Burning’, ‘Rose of England’ and ‘Danny Boy’ were beautifully sung and I loved Lucy Sharp’s playing of ‘The Skye Boat Song’.

A highlight of this show for me was the performance of the younger members of the cast. In the Children’s Medley the singing was strong and lively and the choreography worked really well. Their Act 2 medley with Emma Loring was delightful.

I must congratulate Rob Jones, Mark Edwards and Alex Lawrence for the excellent musical accompaniment. Every number was supported with great sensitivity. Pauline Jackson and Margaret Ashby ensured that the costumes throughout always enhanced the show.

Congratulations to the Directors and the whole cast for providing such a lively show. It was a wonderful way to spend a Saturday afternoon.